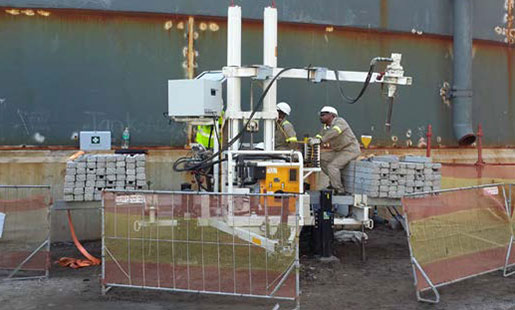 Group Five Construction is appointed to construct a new oil products tank farm at the Transnet Limited TM1 tank farm in Durban.
Some of the newly constructed product tanks were found to be substandard, when they failed testing under water pressure.
A possible cause of the failures was thought to be differential settlement of the tank foundations.
PMI were thus engage by Group Five in March 2014 to undertake CPTu testing of the tank foundations, in order to determine foundation ground profiles and engineering parameters.

The works were carried out in two phases:

PMI prepared well for the project, ensuring that our comprehensive Safety, Health, Environment, and Quality policies and procedures were tailored for the TM1 project, to Transnet’s satisfaction.
Work proceeded well in both phases, and was characterised by the following challenges:

PMI’s Client (Group Five), the main Client (Transnet), and the project Consulting Engineers (Kentz) all expressed satisfaction in the way that the project was effectively and efficiently carried-out.