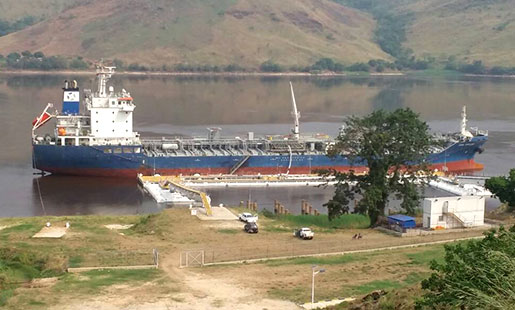 Scope of Works
PMI was responsible for the feasibility study which included the following:

Design works commenced in early 2015 where a floating jetty was designed as the best fit solution in the challenging environment of the Congo River. Prior to the design works PMI had performed a number of detailed surveys and investigations to better understand the site of interest.
PMI mobilised to site to supervise the civil works towards the end of 2015. PMI then mobilised its marine plant in March 2016, including a PMI multicat vessel, dive team and accessories to assembly and install all pontoon elements forming the floating jetty. The contract was governed by strict time frames as the Client had prearranged trading operations of the jetty. Using PMI’s marine plant, together with careful coordination with onshore support, PMI successfully completed the assembly and installation of the floating jetty in approximately one month, which allowed the Client a timely commencement to trading operations.

PMI added a valuable contribution to the holistic management of the project.
PMI’s proactive approach towards all aspects of the project enabled a timely completion of an excellent standard.