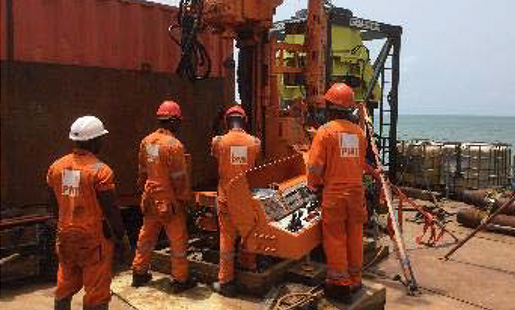 Nearshore borehole drilling and CPTu testing for wharf section of the CNPC Crude Oil Pipeline from Niger to Benin.

Fugro Netherlands Marine BV commissioned Project Management International Limited (PMI) to perform a geotechnical site investigation campaign comprising of boreholes and cone penetration tests (CPTu) at pre-selected test locations. The project was to evaluate the subsurface geotechnical condition and provide relevant geotechnical information required for the foundation design of a wharf protected by a breakwater and connected to shore by an access trestle, positioned near the launch point of the marine pipeline.

The project site was located offshore Seme, about 3km to Benin-Nigeria border in Benin and about 30km east from Cotonou.

The Scope of Work

The scope of works comprised of

PMI employed the Fraste Multidrill ML which is designed and equipped to perform a variety of boring techniques. The types of techniques employed – continuous double barrel percussion, continuous hydraulic push, SPT – was dependent on the material type and also in consultation of the client’s representative.

Following methodology was used to execute the CPTu tests:

The boreholes we executed using the following methodology:

Representative continuous soil samples, SPT samples and Shelby samples were obtained from the boreholes. All borehole logs were prepared with gINT software.

All test results of this investigation were presented in a factual report produced for the client.

Even though the project was performed entering the challenging offshore adverse weather period along the West African coast, PMI performed the campaign to the entire satisfaction of the Client and without incident.

The in-house experience in the area has proven to be the key to success.