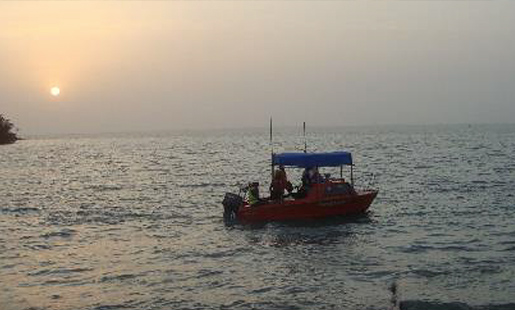 Labosol-AGTS Senegal commissioned Project Management International Ltd (PMI) to carry out a bathymetric campaign for their client SETEC at their proposed project location offshore the coast of Ile Gonzalez in Guinea.

The area for the original scope (ABCD) is located approximated 9 kilometers offshore with a channel route of 6km length and 50m width extending onshore. The beach is sandy and gentle sloping profile on to offshore. Vegetation is mainly shrubs with coconut trees as one moves inland.

Offshore weather climate was mostly calm as predicted by Buoy Weather during the survey execution period. Offshore wind speeds averaged between 2 and 11 knots in varying directions with average swell heights between 0.8m and 1.3m mostly in the south-southwest direction.

PMI mobilized their survey vessel PMI Express by road from the PMI yard in Ghana to destination in Guinea.

PMI processed all data and submitted a final report, including all drawings of the surveyed areas.

The survey was executed to the required standards to the satisfaction of the Client.