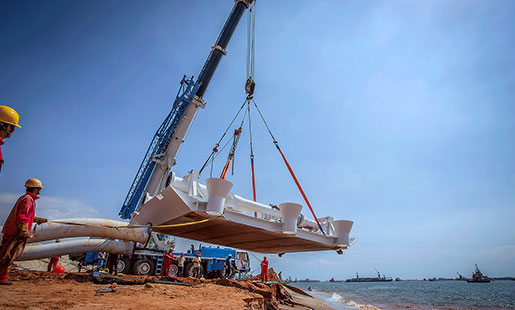 Luanda Fishing Port – CBM Design and Installation
Brief summary:
Puma Energy is currently constructing an onshore tank farm in the Bay of Luanda, Angola. PMI was appointed for the design and installation of a CBM (Catenary Buoy Mooring) system in order to service the on-shore terminal. Installation works included, amongst other, assembly and installation of anchors, chains and mooring buoys. The CBM terminal was designed to accommodate tankers ranging from 15 000 to 225 000 DWT.

Phase 1 – Plem and Pipepull:
Following minor adjustments to the CBM detail design in December 2015 the construction project was divided into two phases. The first phase included the onshore assembly and welding of the 20inch pipeline segments. Following the successful installation of the 8 anchors, buoys and chains – the 2x20inch pipeline strings, placed upon rollers with PLEM acting as pulling head, were pulled via bottom-drag to its design location 800m offshore. The first pipepull operation phase was completed within programme and allowed the Client a timely commencement to start trading product.

Phase 2 – Pipeline Repositioning:
Following the construction of a new quay wall and dredging works (separate contract for which PMI acted as construction supervisor) the second phase commenced where the onshore end of the pipeline was disconnected and repositioned to a recessed location inside the quay wall. The pipeline was dragged by PMI and re-aligned following a number of calculated repositioning manoeuvres. Once the pipeline was in final position PMI conducted a sophisticated underwater tie-in operation to the pre-fabricated risers connected to the quay wall via brackets.