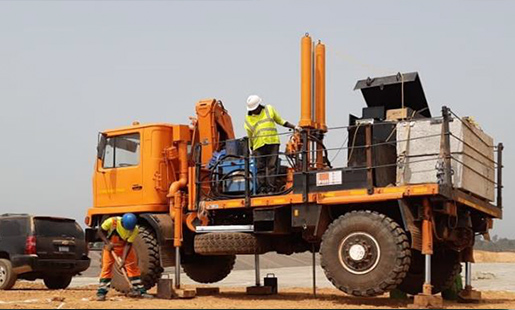 Further to completing the Prefeasibility Study (PFS) for the TMF expansion, Bea Mountain Mining Corporation (BMMC) retained Golder Consulting to carry out detailed engineering design for the facility to the final embankment elevation of 92 mRL. In order to facilitate the design work, some additional geotechnical investigation was proposed.

The PMI equipment was mobilized over land from the base in Ghana to the mining site in Liberia.

The CPTu testing was done without any delays upon arrival on site.

The results of each test were provided to the Client’s representative on a daily basis and allowed for a quick analysis by the client on relocation of the next test position and even increased test locations during the execution of the project.

The Scope of Work was executed on time and to the required standards of the Client.

A final factual report was presented to Client’s satisfaction.