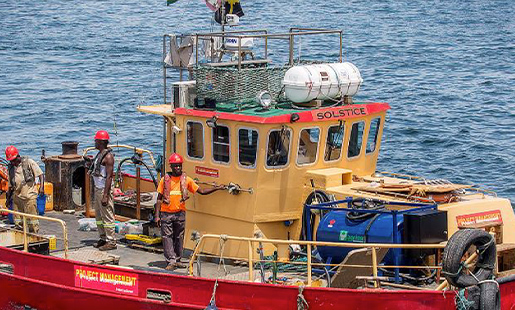 DAMA was awarded the contract to do the capital dredging of the river to accommodate the transport of minerals from the mining areas upstream in the river to the coastal area, so export via Conakry or trans-shipment can take place.

Execution area was the Fatala River, about 90 km from Conakry, Guinea.

The 1.3m draft vessel PMI Solstice was ideal for the task.

Principal Dimensions of the Solstice are listed below:

The Solstice is a utility vessel ideally suited to a number of marine related construction activities including but not limited to survey work, diving platform, crew changes, Jack Up Barge push barge, metocean deployment.

There is a built in moonpool in the aft of the vessel for easy deployment of marine survey gear and the crane on the aft deft is perfectly set up for metocean deployment and recovery.

Suitable for a number of different nearshore marine operations and boasts excellent stability and maneuverability.

PMI comply and adhere to all applicable international, national and local regulations pertaining to health, safety and the environment.

Upon signing of the Charter Party agreement with the Client, PMI Solstice departed from Lomé port in Togo to Conakry in Guinea.

Upon arrival, the vessel was equipped with all survey equipment, making optimal use of the fixed Moonpool on the PMI Solstice.

The vessel executed 3 months of daily surveys on the Fatala river successfully.