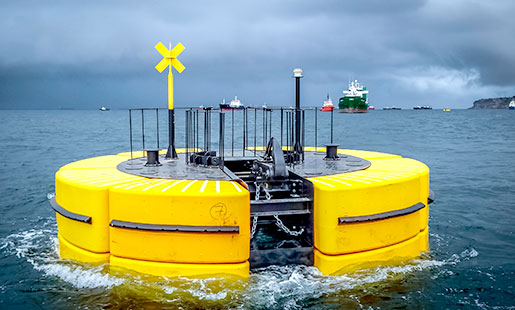 Puma Energy is currently constructing an onshore tank farm in the Bay of Luanda, Angola. PMI was appointed for the design and installation of a CBM (Catenary Buoy Mooring) system in order to service the on-shore terminal. Installation works included, amongst other, assembly and installation of anchors, chains and mooring buoys. The CBM terminal was designed to accommodate tankers ranging from 15 000 to 225 000 DWT.

Design and Procurement:
PMI was responsible for infrastructure product design, specification and management of procurement, import licensing, customs requirements, etc. Following the preliminary design and final layout approved procurement of the larger infrastructure e.g. anchors, chains, shackles, and buoys commenced in middle of 2014 as these items had long lead times for manufacturing. The anchor type and sizing were based upon the findings from the geotechnical investigation works (also performed by PMI). Throughout the manufacturing PMI was responsible for liaising with manufacturers, quality control accompanied by several factory inspections.

CBM Installation
The 8 anchors, buoys, shackles and chains arrived in Luanda separate shipments. Before installation of the anchors the fluke angle was set on-site according to the pre-requisite design. Through the use of a multicat the drag anchor assembled with 8 shots of chain
(220m) each were placed offshore at the install locations. Through a winch and sheave-block system connected to a load cell the anchors were dragged to its design location and proof tested to its maximum design load of 120t. Afterwards The various modules of the buoys were assembled by on site. Afterwards the buoys were attached to the chains as required. The entire operation was executed by PMI and completed within original programme.

Mooring Analysis and ABS Certification
PMI was also responsible for the dynamic mooring analyses on which the maximum wind, wave and current operability criteria was set for CBM port operations. The mooring analyses were performed for several vessel sizes ranging from 15 000 DWT to 225 000 DWT. The entire CBM system was certified by ABS in October 2015.