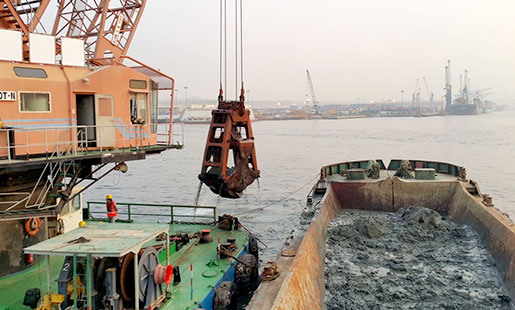 Luanda Fishing Port – Dredging of 50 000 and 15 000 DWT Quay Walls
Puma Energy is currently constructing an onshore tank farm and quay walls in the Bay of Luanda, Angola. PMI was appointed as primary project managers to supervise capital dredging works for a new port quay wall construction. The two quays are designed to berth vessels of 50 000 DWT and 15 000 DWT respectively.

Project Background
Puma’s CBM facility and some of the onshore tank farms are currently operational. China Petroleum Pipeline Bureau (CPP), acts as the lead EPC Contractor for the project. CPP’s main subcontractor for the quay wall construction and dredging works is CHEC (China Harbour Engineering Company). The quay walls consist of a piled tubular and sheet pile combi-wall structure. The two quay walls have a 240m and 200m berthing line.

The dredging scope of work consisted of the following:

PMI Responsibilities During Dredging Works
PMI initially performed a detailed geotechnical investigation throughout the proposed dredging site. This allowed for optimal equipment to be sourced and mobilised to site. Due to the local geotechnical conditions and required tolerances in some locations, three dredgers were mobilised to site, namely a cutter suction dredger, a Trailer Suction Hopper Dredger, as well as a grab dredger, utilising independent hopper barges. With the use of these three dredgers, the dredging campaign was executed accurately and efficiently.

The dredging works commenced during mid 2015, after dredging permits had been issued and a suitable spoil had been located. PMI managed and monitored the disposal site. Regular bathymetric surveys were conducted to monitor dredging progress.

We use cookies to ensure that we give you the best experience on our website. If you continue to use this site we will assume that you are happy with it.Ok