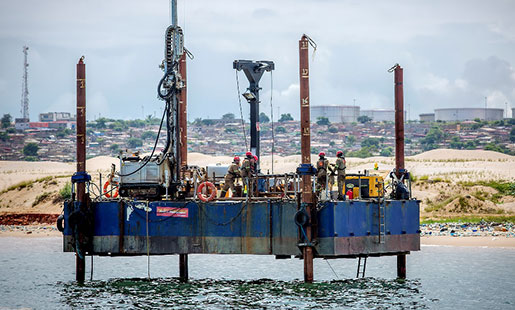 Pumangol is developing an oil transfer facility in Angola – the Luanda Fishing Port Terminal – consisting of a tank farm and associated marine facilities. CPP Angola were awarded the EPC contract for the terminal and contracted PMI to perform various aspects of the contract, including the marine geotechnical site investigation to facilitate the design of the quay walls portion of their EPC contract.

The original Scope of Works for the quay wall investigations consisted of:

During the testing, hard cemented lenses were encountered in the soil column. Therefore, PMI adjusted the Scope of Works to include pre-drilling for some marine CPTu while other CPTu locations were converted into boreholes, thus ensuring to deliver the Client all required design data.

The geotechnical investigations were performed from PMI’s Jack Up Barge for all test locations. After assembly in the port of Luanda, both the drilling and CPTu equipment was loaded onto our Jack Up platform and positioned with our multipurpose workboat ‘Solstice’.
The Contract was governed by strict timeframes and early results were critical to facilitate the detailed design works. PMI strategically coordinated the geotechnical campaign to expedite the early availability of crucial information.
Tests were performed in water depths ranging from 2m to 15m. Samples were flown out to our South African office in charge of all Lab testing and engineering interpretation.