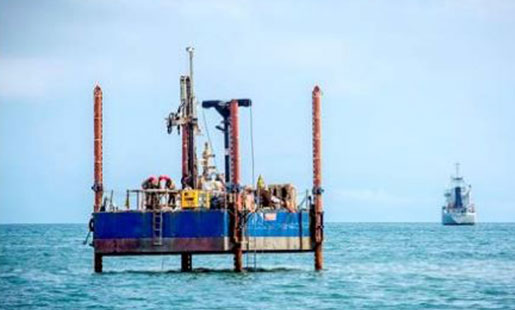 Luanda Fishing Port – Construction of 50 000 and 15 000 DWT Quay Walls
Puma Energy is currently constructing an onshore tank farm and quay walls in the Bay of Luanda, Angola. PMI was appointed for the quay walls geotechnical investigation works, design and review, and construction management. The two quays are designed to berth vessels of 50 000 DWT and 15 000 DWT respectively

Geotechnical Investigation Works
The geotech works started in the beginning of March 2014 and was concluded by beginning of May 2014. 44 boreholes were drilled from PMI’s jack-up barge with Fraste drill rig (drilling depth of approx. 40m each). PMI was responsible for all the geotech works, including drilling, logging, sampling and reporting

Design Phase and Construction Works
It was found that a tubular and sheet pile combi-wall structure was the most suitable structure type for the existing geology. Following the quay layout and preliminary design finalization in September 2014, land reclamation and ground improvement works started. Three months thereafter the detail design was finalized for which PMI conducted the formal design review.
Quay wall piling operations started at the beginning of November 2015. Piling was performed from the land side allowing construction works to commence in the dry. Once the piles were driven to the design depth the tie rods were installed.
Following the pre-tensioning of the tie rods the dredging was then performed in front and up against the quay walls to the required design depth. Following the installation of the steel rebar cages in the tubular piles the reinforcement works and concrete casting of the capping beams could commence.