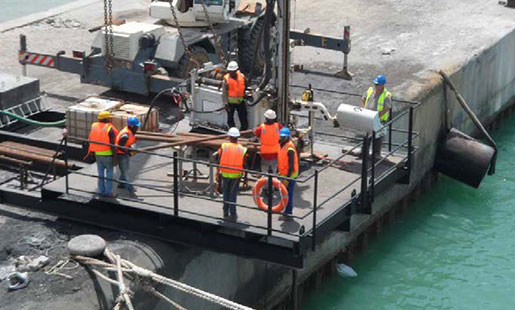 Sogea Satom was appointed to oversee port infrastructure upgrades in the Port of Cotonou, Benin.
In order to design the required works, information was required of seabed conditions at the various upgrade locations.

PMI was appointed by Sogea Satom to execute the required marine geotechnical investigations.

Investigations were executed in the period October to November 2013 to take advantage of the fair weather window for marine works in West Africa.

Vibrocoring and seabed CPTu testing was undertaken from a Multicat Tug vessel that mobilised daily from the Port of Cotonou. The multicat on-board crane deploys the vibrocorer and seabed CPTu test unit to the seabed where the tests are conducted. A vibrocore test yields a 90mm soil sample at up to 5.5m below seabed level. The sample is then logged by a PMI Geotechnical Engineer. Soil samples are then extracted from the vibrocore and carefully packed and shipped to certified laboratories for soils testing. Seabed CPTu’s are used to obtain seabed ground formation information at up to 30m depth. At Cotonou PMI tested to 10m depth. A continuous soil profile with engineering parameters is the output of the seabed CPTu process. PMI executed the marine boreholes by deploying a cantilever drilling platform mounted on the quay wall.

The PMI methodology of successfully executing vibrocoring, seabed CPTu’s and a cantilever platform for boreholes saved the Client significantly in terms of cost and time, when compared with the conventional method of mobilising a marine Jack Up Barge for investigations.