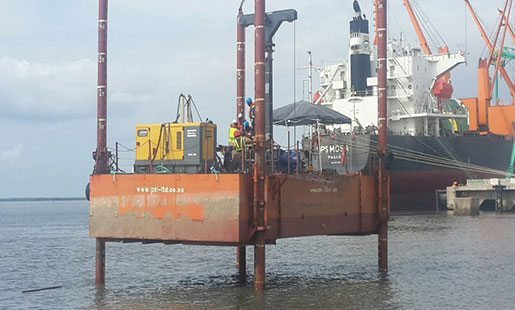 PMI were appointed by Puma Energy to undertake marine site investigations and to prepare the FEED Engineering for a new white fuel products terminal at Matola, Mozambique.

Logging and Laboratory Testing:
Geotechnical logging in .ags format, Sample processing and transport, laboratory test scheduling, and oversight of laboratory testing processes were undertaken by PMI as part of the service.

FEED Engineering:
Puma Energy required the preliminary design of a fit for purpose marine terminal: to accommodate 120,000 DWT vessels; with a top structure fitted with loading arms and designed to handle 16” gasoline, gas oil, and bitumen lines, and a 12” jet fuel line.

The marine surveys were undertaken in November 2015.
BH and CPT work commenced in December 2015, and was concluded in February 2016.
FEED engineering, with procurement documentation, was concluded in May 2016. Preliminary designs were produced for a piled marine terminal consisting of loading platform, berthing and mooring dolphins, walkways and piperacks, including ancillary elements.

The project was completed in a short timeframe, within budget, and to the satisfaction of the Client, Puma Energy.