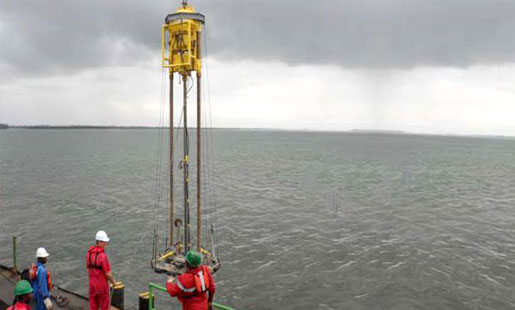 Bonny River Reclamation Investigations by Sub-Bottom Survey and Hydraulic Vibrocores in Port Harcourt, Nigeria
The Client, Prodeco Property Development Company, requested Project Management International (PMI) to execute site investigations including a sub-bottom survey and Hydraulic Vibrocores to support the reclamation works along the Bonny River.
The Reclamation works were part of a dredging campaign needed to develop the terrain along the Bonny River Shore.

The Scope of Work included:
The investigations were executed separately with the Sub-Bottom Profiling survey being conducted initially in order to identify areas with expected sandy materials and its anticipated layer thickness. Based on the findings from this initial geophysical survey, 150 vibrocore positions were identified in order to sample the river bed material.

Execution
The geophysical survey was conducted using a Pinger Transmitter pulled behind the survey vessel, connected to a seismic processor. The images produced were interpreted and, based on the acoustic signatures of the riverbed identified, the vibrocore positions were determined. Initially 50 Vibrocore Positions were plotted and based on these results the remaining 100 VC positions were adapted.

After execution of the vibrocores the samples were analysed to determine The information that was gained from the vibrocore samples enabled the identification of an ideal borrow area for the dredging works to assist in the development of the terrain along the shores of the Bonny River.
After the successful completion of the works all vessels and equipment demobilized and departed shortly afterwards.
A full report was prepared with all results presented.actual grain size distribution of the sandy materials.